It was just me and my boss going on this trip. The owner of the company was meeting us over there. We flew direct from Newark to Shanghai – 15 hours non-stop. It’s not as bad as it sounds, although I was in economy while my boss was in business.  The only difficulty was that we took off at 10am, so when I should have been sleeping to get myself ready for the time change, I couldn’t.

The best part of this trip is that we literally flew around the world.

We arrived in Shanghai around 1pm and headed to our hotel, the JC Mandarin.The room was big but didn’t really have a homey feel. The bed was very hard and the bathroom lighting was very dim. The rooms were aged. It was in the heart of the shopping district but far away from other attractions like the Bund. I would probably look elsewhere when traveling to Shanghai again. . Here is the view from my room. Nice and smoggy. Welcome to China!

A shower never felt so good! I was tired but my boss forced me to go out to dinner. I immediately perked up and we took a cab to The Bund. It was a mid evening and we strolled along people watching. Here are a few pictures: 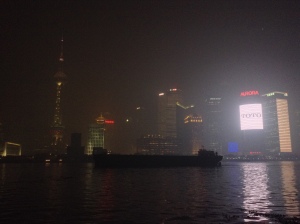 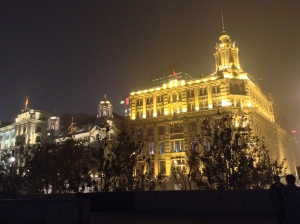 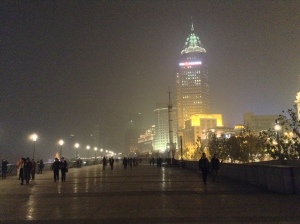 We woke up and a car took us to Yangzhou. It was about a four hour ride.  God bless Sea Bands. They are a blessing. For some reason, “Sweet Baby Jesus” – a phrase I never said before – would come flying out of my mouth. There doesn’t appear to be rules when driving. 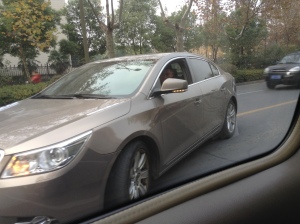 After our business meeting we headed to our hotel, Four Points by Sheraton.  The rooms were big, clean and had a homey feel to it. It was our second night in China and maybe I’m being partial to this hotel because I got a great first night sleep in it – therefore I really liked it! The breakfast buffet was good as well as the cappuccinos. The staff was very friendly however, the only downside was that you didn’t have control of the temperature in the room. So it got very hot at night. I would recommend this hotel! We had to wash up and go to dinner with our hosts. The Chinese business people are VERY accommodating. They pick you up from the airport, drop you off/pick you up from the hotel and they even take you to competitors. They also like to wine and dine you with big elaborate dinners that have several courses and involve a lazy susan.

The next morning it was off to Ningbo which required a 6 hour drive. We were going to take the train but our hosts were so kind to drive us. Unfortunately, we woke up to this smog (not fog) and they shut down the highways so we were forced to take back roads.

I was actually dehydrating myself for the ride. If you didn’t know, the Chinese do not have western style toilets. They have what’s called squat toilets. The hotels do not have them – at least the ones we were staying at but most restaurants and rest stops do so be prepared. When the driver pulled off to use the bathroom, I decided to check out the woman’s room. There were stalls of squat toilets and one very public western toilet out in the open – as if shunning you for using it.

I don’t think anyone ever cleaned it so I decided to brave the stall. It’s not as bad as it sounds and I felt more proud of myself than I should have! Day 3 and I successfully squatted.

We arrived at the Ningbo Marriott in the evening. It was very nice and accommodating. The executive lounge was lovely and the front desk staff were very nice.  We grabbed a bite to eat and checked out the executive lounge on I believe the 11th floor. It had some snacks and free beer so I was in. The view was lovely too. 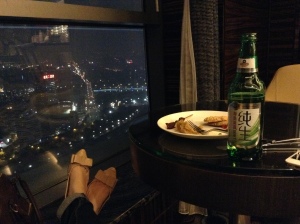 The next day, we finished up yet another meeting and headed to the airport where we flew to Shenzhen. Our hotel was in Dongguan – the Hyatt. This hotel is hands down one of the nicest hotels I have been to in the world. My room had a lovely view and was large and spacious! I took advantage of the spa and I would recommend a foot massage from Yolanda. I ate at the buffet for dinner one night and thought it was just ok. The second night I had dinner at the bar in the lobby and the fried noodles were wonderful!! I would highly recommend this resort. The only negative is that it’s a walk/drive to downtown but the hotel has everything you will ever need..

We were escorted to lunch with the company we were visiting. This went beyond a lobster tank at a nice restaurant. It was an aquarium full of choices! 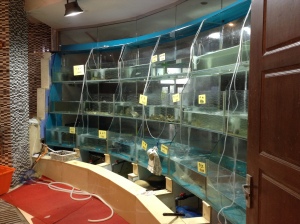 Shenzhen reminded me of South Florida in some spots and others not so much. 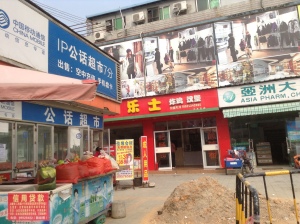 After business was complete in China we flew to Kuala Lumpur, Malaysia. For more on this leg of the trip, check out my blog post!